In case you were wondering what we’ve been up to, I can assure you there has been plenty of activity at Vanha Talo Suomi. As you’re already aware, the summer weather proved highly unpredictable. Pete succumbed to a hacking cough and flu as reward for his persistence in working amid the fickle weather. Luckily, he’s back on the mend and almost back to 100%

From my last post and photos you could see the FinnFoam insulation flooring was placed top-side and an unseen plywood sub-floor underneath in the cellar. Additionally building pilings were rented and used to support the whole work area. Reinforced steel was laid in on top of the foam and a load of cement from Ruudus poured on top.   Pete is leveling the fresh cement below.

After a week the plywood sub-floor in the cellar and support poles were removed. A double layer of foam was attached along the top edge of the block perimeter before any wood could be applied.

After the initial 2×6’s were secured it was time to consult the blueprints and get busy with making some walls!

It didn’t take too long and the sauna walls were up, then a window opening. In the days following, the full length of the remaining outside walls were nailed in and braced. Final measurements were taken then the trusses were ordered. Now we wait for delivery of those. Hopefully they are constructed and shipped without too much delay.

This progress took some time due to the set-up wait on the cement, a few drizzly rain days, and Pete getting the flu.

With the effort towards the stud walls complete, attention to other projects got started in earnest. I finally began tackling the windows which proved to be a lot of hard work. In some cases it seems that the outside portions of exposed wood had seen about all the good days it had left, and was well into the bad days of whatever life these old windows still have left in them. But I scraped and sanded, scraped and sanded and eventually they started coming around. 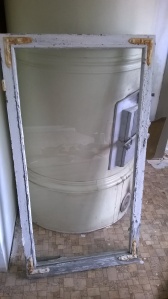 Each window opening comprises one double-glazed wood-framed window inside, as well as one single-paned wood-framed window outside The inside windows are hinged and swing in the room, the outside are hinged and swing out with help of an armature. In the case of the 5 windows in the living room, there are 3 that are non-hinged and are kept in place with a small latch. 15 windows downstairs have received the same treatment and this is how they’re looking now as compared to the before photo. 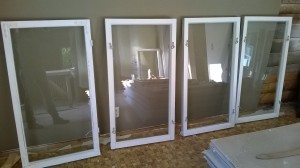 The kitchen is only partially done. The inside windows are scraped, sanded and painted, but the outsides are yet to do. I can’t get to a couple of them to take them out due the scaffolding that were using to get in and out of the house with. Our front porch needed some new support beams installed to replace a couple that were rotted due to the board being in direct contact with the old cement stairs that were the original design. 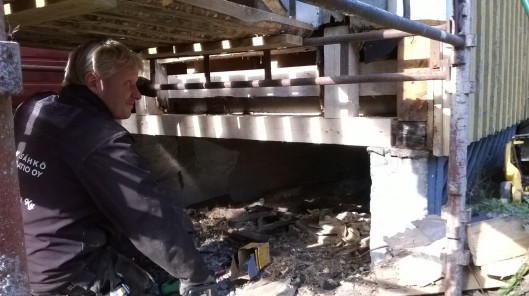 Pete managed to get this small situation sorted out today without any difficulty. The porch foundation is another project on the list of jobs to do. As you can see from the photo, the porch is supported on the corners only by piling. We have opted to cement block the porch foundation and tie it in with the new construction blocks bringing everything together visually. Structurally it can’t hurt to have better support!

At some future date, but hopefully not in the too distant future we can scrap the scaffolding and have a real stair and porch landing to our front door. 🙂

Pekka stained the boards for the outside window framing and they are all ready to go. Because of the added insulation, the window openings are now much deeper than they were originally. Each window will have the framing boards installed, then the outside trim boards nailed up to the siding. I was still fiddling around with making a decision on the style for the trim boards until just the other day. For rintamamiestalo’s in general, there isn’t too much you can’t do, but in keeping with the original style and the time period the house was constructed, does create severe limitations. I saw a house while we were out and we drove closer for a better look. I think I’ve found the trim board design!! All I’m going to say is that it’s simple but unique. Just in case you were wondering, the framing and trim color is GREEN!

Guess that about brings everyone up to speed on what’s been happening! Pete is working through the week completing small projects while we wait on the trusses. It’s a great chance to get some things done! Thursday we’ll be visited by the plumbers who will be piping in the works in the new construction area for the sauna, bathroom and laundry room. Also on Thursday the digger guys will return to finalize the drainage system and replace the dirt around the house foundations. Think they’ll also be digging out a massive stump, leveling and smoothing out the elevation issues and otherwise tidying up from their last visit! 🙂

The gardens are all still blooming, and the catalog purchases and the items from Poland have all arrived. Between the windows I finally devoted some attention to re-edging and weeding out the garden beds. They look much better for the effort!